The Problem with Ubiquitous Capture 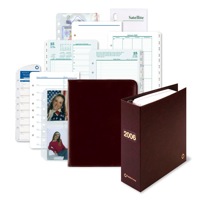 Years ago when I started my first job out of college, my employer sent its new crop of computer consultants to South Bend, Indiana for a week-long training session. Typical stuff: we watched a hilariously inappropriate sexual harassment video, learned how to use the company’s timekeeping system (a thick client C++ program named, aptly, "Data Time Entry"), and generally got used to the idea of living out of a suitcase.

Late in the week, an entire day was devoted to a presentation by a FrankinCovey trainer who showed us how to use the fancy leather-bound, three-ring binder/planner/organizer that our company purchased for us, complete with a storage case for archiving calendar pages. She ran us through the whole Covey system. We watched a video of one of Stephen Covey’s motivational seminars-cum-religious revivals and made lists of our goals, hopes, and regrets. I raised my hand and told a story about how lousy I felt for saying something nasty to my mom before I left that week. "Call Mom to apologize" went onto my Weekly Compass, marked Priority A.

At one point, the trainer demonstrated a little pocket notebook that could be detached from the binder when you didn’t want to lug around the whole thing, "a satellite that always returns to the mothership," she called it. We snickered while she pantomimed writing down someone’s phone number at a Bears game; she was crazier than the guy in suspenders from the day before who taught us about management with a modified version of Monopoly. Most of us were planning to buy Palm Pilots with our first paychecks anyway. But I didn’t realize then how prescient that moment was. Training class Matt would laugh Matt circa 2008 all the way down I-90 if he could see me now.

Those of us who use GTD obsess over our little satellites for capturing "stuff" the second it pops into our heads. I’ve used all types: index cards, Moleskine notebooks, legal pads, PDAs, voice recorders, you name it. Lately I’ve taken to using a Field Notes memo book mainly because I like the way it fits in my back pocket. Coincidentally, the Field Notes motto also sums up the whole capturing idea well: "I’m not writing it down to remember it later, I’m writing it down to remember it now."

We have this capture thing down pat. Not a stray thought floats by that doesn’t get recorded, sorted, and filed. The problem with this highly optimized process is that it tends to collect a lot of crap. That notebook sure is handy when I run out of orange juice, but it can also fill up with a lot of bad ideas, things I don’t need to buy, and books I’ll never have time to read. My classic capturing overkill happens when I’m monkeying around with my wireless network at home. I get a notion to do something simple like buy a new backup disk, and the next thing I know I’ve written a bill of materials to build a server farm in my coat closet.

The "What the hell was I thinking?" Moment

I concede the value of David Allen’s point that we have to get things out of our heads so they don’t bogart mental RAM, and he does account for some processing time to weed out the silly stuff. My point is that a lot of the detritus floating between our ears shouldn’t make it that far, and this obsession with perfect capture is at fault. It reminds me of the Seinfeld episode where Jerry writes himself a note in the middle of the night and can’t decipher it in the morning, because it was really about a B-movie he had been watching where Larry David is dressed like an astronaut. 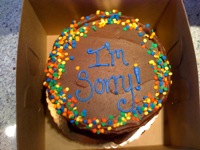 Treating every little harebrained idea and irrelevant suggestion the same way you treat remembering to buy your wife a birthday present isn’t a wise use of time. If I had back some of the time I spent calling Jott to, I don’t know, play fetch with my dog, I’d be a much happier man. Actually, I live with someone else who acts on every impulse like that, and it’s not always pretty. He’s also three years old.

The real killer is that some of the bad stuff can filter through and land on one of your to-do lists. Most of us are smart enough to recognize bad ideas when we see them, so the danger isn’t that we’ll find ourselves doing things we shouldn’t simply because it managed to worm its way onto our list. But a lot of us do have issues dropping something once it’s reached that level of commitment. So we keep it on the list, taking up space and adding to the cumulative dread of a to-do list bloated with junk.

The Important Stuff Will Come Back

I don’t buy this theory that simply writing things down somehow reduces stress. All it means is that those things are now on a piece of paper or some kind of digital list, usually in our pocket at all hours of the day, mocking us for not being able to finish them. Maybe instead of optimizing our means of capturing ideas, we need to optimize our brain’s spam filter. Good ideas and important reminders will rise to the top, and if we think about them once we’ll think about them again.

Next time, try controlling that impulse to write something down the second you think of it, and save it for a time when it’s more convenient. If it’s worth your time, you’ll be able to think of it again. I often have ideas when I’m walking my dog, but I purposely don’t stop to record them. If they’re still on my mind once I get home, then they go into the inbox. Since I’ve started doing this, my real to-do list has shortened considerably, the bills still get paid, and the house hasn’t burned down. I may have cost myself a few router resets, but my dog and I are okay with that.

Source:
All articles from this source: 43folders.com (10)