Designed to free up memory from ideas by transferring them to external storage media; this eliminates the sense of "forgotten ideas" and helps generate new ideas using the techniques of mental maps

Many ideas on various topics constantly "spin" in the head of man: how to work, how to take rest, how to make money etc. But many of them are quickly forgotten (they fly out of memory).

The most important ideas will always come to mind and one will not forget about them until they have been realized. But what about the other no less important ideas, which continue to "fly in the air"?

It is necessary to materialize the idea immediately upon its generation.

Materialization helps to "clean up" the consciousness of a large number of less important ideas to focus more on realization of the most important ideas and helps the intelligence in generating more useful and complex ideas.

A materialized idea will not be forgotten for sure (of course, if you do not lose the storage media where this idea is stored); this eliminates the sense of "forgotten ideas" and reduces the stress of intense activity.

The method of materializing ideas

The main process during materialization of an idea is analysis (breakup) of the entire mental image into its component parts (signs, properties, feature ...) and their storage on an external storage media in the form of separate words, pictures and other symbols.

But this way is unacceptable for complex ideas, because it does not correspond to the natural human thought, characterized by association and hierarchy.

There are following types of associations:
- Similar (lighter-match sticks)
- The opposite (mother-father)
- Cause and effect (lightning-thunderstorm)


They help in generating ideas, creating meaningful links, stimulating the imagination, remembering the links between images in memory and restoring them in the future for processing and realization. This process occurs continuously in the consciousness, for example, when telling a story or generating an idea about a new product or service: thoughts run one after the other, in fact, in the form of a particular chain.

The hierarchy of thought is the detection of hierarchical links between images by the consciousness, which provide integration of one image into another (hierarchy of the systems).

For example, car-wheel, house-window, man-hand etc. It allows you to analyze the images (break them down into component parts) and to synthesize new ones (collected from existing images), something that helps the imagination, generation of ideas, remembering the images as a whole.

Having natural thought, it is very difficult to recover a single image from plain text, since it is hard to identify the links between concepts and accurately determine the structure of the original image. Moreover, writing plain text requires a lot of time because one may write a lot of superfluous stuff and often rewrite the entire sentence.

The most suitable method for the materialization of complex ideas is the technique of mental maps, which allows one to record ideas in the most intuitive and familiar to the consciousness form.

This is the method of creating a tree image of the process of natural systematic thinking with the help of associative schemes.

Application of this method involves the following steps:

- The basic concept of the idea is drawn in the form of a picture or words in the center of a piece of paper.

- This concept gives rise to radial branches and the key terms that describe its characteristic, bright and memorable signs, properties, and related concepts are written around. It is best to complement each important concept with pictures in order to facilitate the process of recovery of ideas and remembering maps.

- Further, the associative branches that describe the concept are drawn in the same manner. The process continues until a complex and obscure idea does not turn into an understandable hierarchical tree of related concepts.

- Finally, one must select the most important branches in the tree in order to identify the most useful concepts and links that need to be realized in the first place or need to be elaborated upon. It is best to change the thickness and color of branches for this.

For example, the process of mental map creation has the following mental map: 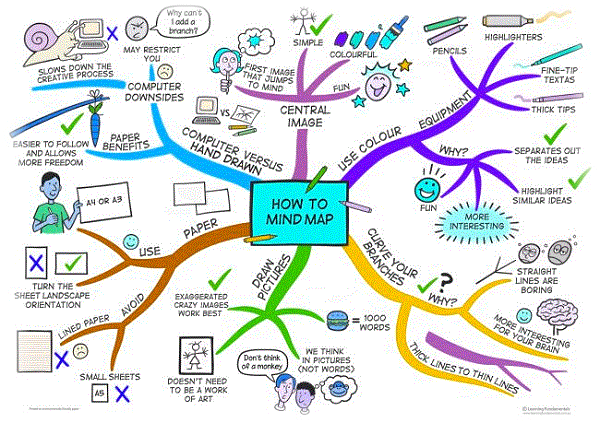 The main properties of the mental maps are:
- visibility: allows one to view and recover the entire idea, almost in one glance, and to not re-read 10 pages of text.
- aesthetics: it is a picture that has a nice appearance.
- non-uniformity: concepts with different qualities can be displayed on different branches of the tree, for example, the external appearance (shape, color…) of something is described on one branch, and its taste on another branch.


The spectrum of effective usage of mental maps is very broad:
- Planning of (a day, meetings, articles, a project ...)
- Training (notes from a lecture, books ...)
- Organization of information (brainstorming, presentation ...)
- Decision-making (to buy – not to buy, to go – not to go ...)
- Problem Solving
- Generation of ideas

Organization of the materialized ideas

Most of the ideas need to be realized - to improve the environment or oneself, to create new and useful objects or to destroy the harmful ones in accordance with the idea.

Such ideas are divided into goals and affairs:

Goal is the desired state of a system, for which it spends resources, performs actions and receives a certain result upon its successful achievement

The goals as well as the affairs must bring a useful result. But the goals differ from the affairs; the path that is required to be accomplished in order to achieve the desired result for a goal is unknown, i.e. there is no definite plan of action. Therefore, the goals need to be elaborated upon for as long until all the affairs, needed for their achievement, are not determined.

In such a case, the number of affairs could grow substantially and it is important to organize the goals in order to improve the management of the process of achieving goals.