A person gets a lot of ideas everyday on various topics: work, a new project, vacation etc. However, some ideas are extremely useful (how to cure cancer, to organize a profitable business ...), while others are absolutely useless.

A question arises: how to learn to generate useful ideas?

First you need to understand what an idea is and where does it come from: does an idea have some kind of a repository or is it a completely unique product of the human brain.

It is used by man in practical and creative activity to create new objects, develop the existing objects or destroy the harmful objects in the environment and to create the relationships between them. Also, ideas are needed to achieve goals and solve problems in personal development and realization of the destination.

The process of generation of ideas

Man perceives and processes the information with his intellect, which includes 3 levels:

Consciousness is the ability of a system to gain, process and use knowledge about the environment and itself for further interaction with the environment, personal development and realization of its destination in order to improve the environment.

Fore consciousness is the system's ability to perceive and process information simultaneously about several elements of the environment without the involvement of consciousness, the information being available to him upon concentration of attention on it, to speed up the process of learning and generation of ideas if in case the consciousness lacks capabilities.

Sub consciousness is the system's ability to perceive and process unlimited amounts of information about the environment at the same time from all the receptors without the involvement of consciousness and fore consciousness to automatically generate reactions when exposed to an external stimulus (reflex) or in the presence of a skill to generate ideas if the fore consciousness lacks capabilities.

For the work of intellect, memory and conscience are required:

Memory is the system's ability to preserve, accumulate and playback known information about the environment and itself in the form of thoughts and images for their further use by the consciousness upon making decision and generation of ideas.

Conscience is the system's ability to form internal principles that govern the decision-making process to perform certain actions, to compare its actions with the principles, norms and laws and carry out adjustments upon detection of discrepancies to avoid harmful influences on the environment.

Intellect is the system's ability to use its consciousness, fore consciousness and sub consciousness for the organization, management, control and planning of its activities, preservation and use of the perceived and manufactured information in the memory, personal development and realization of the destination, limited by the conscience

Mind is the ability of consciousness to perceive and analyze information about the environment to acquire new knowledge, save it in the memory and further process it by sanity.

Sanity is the ability of consciousness to systematize, classify and synthesize the perceived knowledge perceived by the mind about the environment and save them in memory.

Imagination is the ability of the consciousness to synthesize images by combining existing knowledge in memory to create new or modify existing elements in order to improve the state of the system, generate ideas and achieve goals.

In accordance with the principle of hierarchy, each person has a super-system, which also has all of these capabilities that are more developed than the other abilities (the emergence of systems). Person uses his sub consciousness to communicate with the super-system through its consciousness – super-consciousness, which Carl Young called as the "collective unconsciousness".

All processes that are associated with the generation of ideas can be summarized in the following scheme: 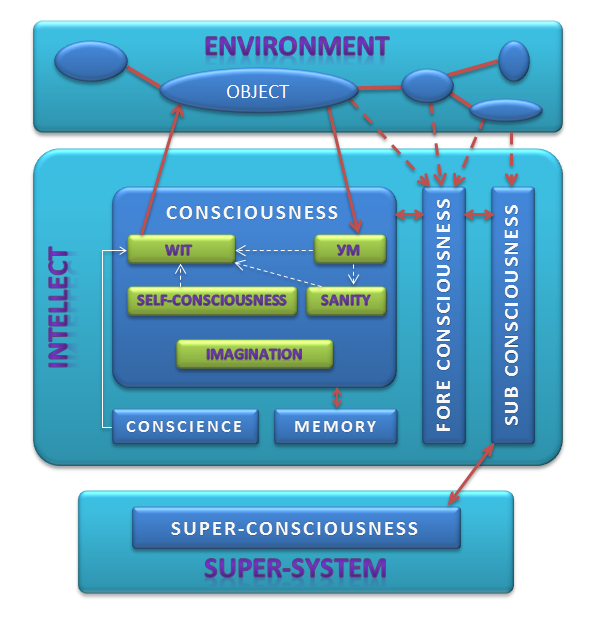 Usually, the sub consciousness generates ideas absolutely unexpected. At such moments a man says, "It dawned on me", "Eureka", "I have a muse" etc., he feels the inspiration and desire to realize these ideas.

Consciousness can receive many ideas and it will not have time to realize them. In this case, the idea may just get lost (forgotten). To avoid such a situation, it is necessary to materialize the idea.

Where do unique ideas come from?

The great inventor Nikola Tesla (1856-1943), whom the contemporaries call "the man who invented the 20 century", could generate hundreds of new ideas in a day. But everyone was shocked by his confession: "I am not the author of these ideas". He stated:

My brain is just a receiver. In the universe, there is a specific kernel from which we get knowledge, strength and inspiration. I have not penetrated into the secrets of this kernel, but I know that it exists

"Many people believe in God. For some, God is Jesus Christ, for others - God is a world of information, which knows everything and understands everything," - says Strebekov D., Doctor of Technical Sciences.

"Tesla's creative method leads us to assume that there is a global bank of information, which in particular is called as the information field of the universe, and Tesla was able to connect to this source, scooping out the necessary information. He dreamed about everyone gaining access to it" - said Yuri Mazurin, Doctor of Physical and Mathematical Sciences.

Increasingly, scientists record the ability of people to consciously connect to this information field and get information out of it about objects that do not exist in our world. For this, they enter into a state of altered consciousness.

The method of generating useful ideas

Based on these investigations and statements, we can formulate the following method to generate ideas, which increases their usefulness.

It is necessary to concentrate on one important object (goal, problem, subject, phenomenon...) and get as much information as possible about it so that the consciousness can process it. The Internet will be very useful in this, playing the role of a global knowledge bank of the entire mankind.

If the object turned out to be quite complex, the information about it is too much or not enough, on the contrary, in such a case the generation of ideas is carried out by the sub consciousness. In this case, the idea may be obtained through a sufficiently long period of time (day, week, month ...). It all depends on the size of the object. Then we'll just have to wait and occasionally "pump up" the consciousness with new information about it.

If you need to generate a unique idea, your sub consciousness will make a connection with the super-consciousness and receive the desired information about the new object from it.

Until the desired idea is not generated, it is necessary to materialize everything that comes to the mind, relating to the idea. For a simple idea, one can take notes on a piece of paper or a computer in the form of plain text or drawings.

However, for complex ideas, such materialization is not acceptable, because it does not correspond to the natural human thinking, which is characterized by hierarchy and association, something that makes the recovery of the idea from the text difficult and slows down its generation.

To take full advantage of the method, it is recommended to materialize the idea by using mental maps that correspond to the natural systemic thinking. It helps to visualize the ideas and execute them for further processing, which speeds up the process of generating ideas, as in this case, the functioning of the consciousness is significantly activated.

The use of this method helps to generate and realize a more useful and qualitative idea, as to the man personally, so to the environment.

The generation of ideas also helps to develop, solve problems, achieve success, understand the meaning of life, find ones destination and realize it.

Try to get engaged in more complex and important objects, as much as possible, instead of spending personal time on trifles.